Rubadoux’s career as an artist spans over sixty years. Born in Rochester, New York in 1937, there was never any doubt that Rubadoux would become an artist. Drawing is like breathing to him, and he draws as well as almost anyone alive.

Rubadoux has always been a seeker of the spirit, an artist whose lifelong quest has been to capture—in thousands of drawings, prints, and paintings—what Robert Henri called “the flying spirt of the bird rather its feathers.” It’s a great deal to expect from any artist, but Rubadoux achieves it so consistently that it has become a major touchstone of his extravagantly beautiful, profoundly personal work.

He continues to work in a variety of media with as much originality and inventiveness as he did nearly six decades ago. He’s best known for his drawings and paintings, but there are also his printed works, sculpture, and most recently, architectural glasswork.

Gentle, shy, and soft-spoken, Rubadoux is a very private man who believes deeply in the preciousness of life and its interconnection with all living things. He divides his time between Sarasota, Florida and Nova Scotia.

Excerpt from Poem called Brian Age Seven by Mark Doty. Sent to me from Craig on August 13, 2017.
He breathes here,
on his page. It isn’t craft
that makes this figure come alive;
Brian draws just balls and lines,
in wobbly crayon strokes.
Why do some marks
seem to thrill with life,
possess a portion
of the nervous energy
in their maker’s hand? 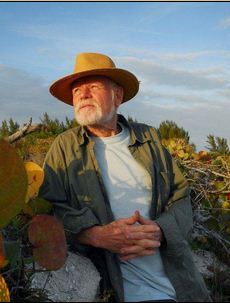